JASPER, ALBERTA – Despite the abundance of crossovers and sport-utility-vehicles taking more and more of the Canadian automotive market share every single month, the midsize sedan is still a very popular choice that soldiers on with the same essential formula. The Honda Accord and Toyota Camry continue to be the perennial choices, with plenty of assertive competition from the North Americans as well as the Koreans. After five model years of success with the last car, they’ve taken the wraps off the 2018 Honda Accord, likely the best and most advanced one yet. We flew to Jasper, Alberta to drive the new model through the mountains.

From a looks perspective, the 2018 Accord is elegant while maintaining its conservative nature. It’s not as aggressively styled as the new Civic, which will likely bode well for it. The outgoing car had amazing sightlines, which have now been slightly compromised in favour of style – the latest model has a raked roofline that’s almost fastback-like. LED headlights and great wheel designs spiff things up significantly.

The biggest change to the new Accord is a complete powertrain overhaul. After decades of success using the same recipe, the naturally aspirated Honda Accord  is gone from the Canadian market. Entry-level models are powered by the same 1.5L turbocharged four-cylinder that we’ve now seen in the Civic and CR-V. Output in the Accord is 192 horsepower at 5,500RPM and 192 lb-ft. of torque, available between 1,600 and 5,000RPM. This is the one most Canadians will buy, and is a buttery smooth motor. It doesn’t have the urgent throttle response from a standstill that the outgoing car did, but as boost builds up, so does power. Non-purists won’t really be able to tell the difference, as this powertrain still packs more power and torque than the outgoing car.

Outgoing Accords had a meaty 3.5L V6 that, while being fairly modern, had the nostalgic appeal to its ancestors of the 1990s, especially when paired with the six-speed manual transmission. The new car replaces this motor with a 2.0L turbocharged four-cylinder, sharing its architecture with the Civic Type R. It’s obviously tuned differently and doesn’t have the high-strung nature of Honda’s latest hot hatch, but still offers a generous 252 horsepower at just 6,500 and 273 lb-ft. of torque between 1,500 and 4,000RPM. The 2.0T is a bit down on power when compared to the outgoing V6, but power is more available at lower RPMs and the car feels peppier overall. Both motors also have VTEC. 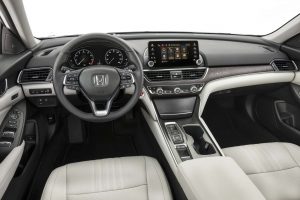 The transmissions are also new, but purists can rejoice – the manual transmission lives on! Though they will have a very low take rate, both engines on the Accord can be paired to a six-speed manual transmission – consider this a grown up Civic Si. Unfortunately, the shifter action is a bit on the rubbery side and the clutch uptake is a bit too light. If three pedals aren’t for you, the 1.5L model is equipped with a CVT, one of the best in the business, with a “Sport” setting that will deliver ample engagement, relatively speaking. The 2.0L models are paired to a new 10-speed automatic transmission, which shifts imperceptibly and smoothly.

Ride quality is something that midsize sedan buyers have high expectations for, and Honda delivers in this regard. The Touring model gets adaptive dampers, which are welcomed and a rarity in this segment. Regardless of trim, the Accord rides firmer than the Camry, but not so much so that it would be considered thrashy. It’s simply the sportier choice, and especially when packaged with the larger wheels, bumps are felt through to the seats. Steering feel is electrically assisted, so it doesn’t feel as good as hydraulic racks of the past, but the car goes where it’s pointed with no hesitation.

The Accord now has one of the best interiors in the segment, stepping things up and slightly surpassing the new Camry. The leather used on the seats, door panels, and steering wheel is quite supple and feels great, and there is some use of open pore faux-wood trim lining the dashboard. The front seats are very supportive (we only tested models equipped with leather), and provide great side bolstering and thigh support. Rear headroom leaves a bit to be desired, another compromise for the car’s pretty looks, but six-footers will have no problems staying comfortable in the front seats. Rear legroom is generous, too – we like the Accord’s accommodations more than the Mazda6 and Altima.

All of the infotainment has also been replaced, and the 2018 Accord gets the all-new system we sampled in the Odyssey. An 8.0” touchscreen is standard, and has connectivity for Apple CarPlay and Android Auto. A volume knob has returned, along with a physical tuning knob as well. The screen itself sits atop the dash, rather than being recessed into it. This style has been the object of criticism on other vehicles, but personally, I don’t find it an issue at all and actually appreciate the more upright angle when needing to quickly glance at the screen while driving. There is also a new 7″ information screen in the instrument cluster, and it’s a lot cooler than it sounds. Response is snappy quick, and it’s capable of displaying a whole slew of information. Lastly, the Touring trim gets a heads-up display.

Honda refers to their active safety suite as Honda Sensing, and it’s standard on all trim levels of the Accord. It includes lane keeping assist, forward collision warning, adaptive cruise control, traffic sign recognition, road departure mitigation, and low-speed follow. The neat addition here is that unlike in previous models, this package is available on both automatic and manual transmission models. The only catch is that the stick cars don’t get the low-speed follow feature. All trim levels also get the multi-angle rear view camera and Driver Attention Monitor and automatic high beams.

Accord models equipped with the 1.5L motor and CVT transmission are tuned for fuel economy, and the result is a rating of 7.9L/100km city, 6.3L/100km highway, and a combined rating of 7.2L/100km. Manual transmission models have similar economy, but the CVT is definitely the more efficient choice. Fuel economy figures for the 2.0L motor have not been released at the time of this writing.

Priced competitively within the midsize sedan segment, the Accord starts at $26,490 for the base LX with the manual transmission (CVT starts at $27,790). All Accords sold in Canada come standard with Honda Sensing, LED headlights and taillights, Apple CarPlay/Android Auto, power driver’s seat, proximity key, driver attention monitor, and a wiper de-icer (Canadian exclusive!).

The Accord Sport comes with some dynamic goodies as well as unique styling tweaks, and sits at $29,790 for the manual and $31,090 for the automatic. There are also EX-L and Touring trim levels with the 1.5L, and this powertrain tops out at $35,790. Touring exclusives include wireless charging, ventilated front seats, and an adaptive damper system (2.0L only). The 2.0L engine can be had in either Sport or Touring guise, the latter only available with the 10-speed automatic at $38,790. The enthusiast pick here is the 2.0L Sport with the six-speed manual, at $32,790 and generously equipped.

When all is considered, the 2018 Honda Accord is still one of the best choices for a midsize sedan. It offers an unparalleled reliability record with indestructible durability and a cult following. What helps the Accord’s cause against its main rival, the Camry is the sportier chassis with more driver engagement. The new engine choices may not be as high-strung as their predecessors, but they offer a broader powerband that’s more usable in day-to-day use.

All combined with top-notch safety features, the package comes together to make for a sedan that’s as close to perfect as we’re going to get. The 1.5L models go on sale in Canada on October 27, closely followed by the 2.0L in late November. Keep your eyes out for the redesigned Accord Hybrid with an all-new powertrain to show its face in early 2018, too!

By Shari Prymak It’s no secret that consumers are increasingly rejecting traditional cars in favour of trendy high-riding crossovers. Despite their dwindling popularity, midsized sedans remain an important offering for automakers, only now it’s more […]