Although new to Canada, the Qashqai has been on sale in Europe for over a decade where it is the best-selling vehicle in its segment. Subcompact crossover competitors here include the Chevrolet Trax, Honda HR-V, Mazda CX-3, Subaru Crosstrek, Toyota CH-R and the coming Ford EcoSport.

We drove the Qashqai mostly through downtown Montreal traffic and on the south shore along the St. Lawrence up to Vaudreuil and Dorion. In beautiful rural Quebec, we drove through some nice scenic routes testing out the crossover’s capabilities on highways.

We drove the top-of-the-line SL trim and a base S trim with a manual transmission. Prices range from just under $19,998 to over $29,498 for the top SL model. 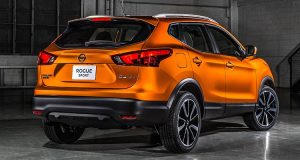 Whereas the affliction that many of the subcompact crossovers suffer from-underpowered engines-such as in the Trax and HR-V-was not felt in the Qashqai. Although it was not a racer and it need not be-as one does not buy a subcompact crossover for that reason- I never felt the engine was underpowered and not up to the job on acceleration.

The Qashqai is very quiet on the road and on the highways and has a nice smooth ride that will enure it to most buyers of this class. The handing is reasonably responsive for a small crossover although the steering is lacking in feel.

For the class, it’s quite roomy, and the seats are comfortable.  It is quieter than the Mazda CX-3 and wider than the GM offerings. The wheel well legroom in the front for the passenger was very good but the driver side feels a bit narrower. Overall, it is the perfect size for the subcompact class. 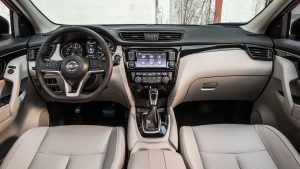 The interior finish, particularly on the SL, is very nice with black piano trim around the screen, across the dash and the door panels with highlighted chrome trim. It felt more upscale than its price with a padded dash, armrests and across the windows in the front door panels.

The base version had a more sombre interior with black piano finish only around the screen and grey matte finish inserts along the dash. But then again, the price of entry for this model was just under 20 grand.

The cargo space was good, being not much less than the much bigger Rogue.  It had hooks and nooks and straps on both sides of the cargo area. For subcompact drivers- young couples, retirees and people with one or two small children - the Qashqai is the right size. For those with older or more children, the Rogue would be the way to go.

In terms of the subcompact class of crossovers available in the market today, the Qashqai should be near the top of your list for its all-around packaging, value, and comfort.