2017 Mini Cooper - There was a time when the Mini Cooper was considered a people’s car, much like the Toyota Corolla is today. It was Britain’s answer to the popular Volkswagen Beetle, just a simple, well-designed car that almost anyone could afford. The Mini Coopers of today though can hardly be described as simple and affordable. They are more like pricey fashion accessories than basic transportation appliances. Like the classic versions, however, the latest Mini’s know how to be fun and exciting to drive, and the best of the lot are the ones with the John Cooper Works badge.

The original John Cooper Mini’s were race-tuned giant-slayers built for rallying. They managed to outperform some serious machinery from back in the day, and they even won the prestigious Monte Carlo Rally three times. As impressive as they were, the latest 3-door John Cooper Works Mini is in a whole different league.

The John Cooper Works differentiates itself from the regular 3-door versions with a sporty aero kit, unique wheels, sport seats, and other cosmetic touches. It also includes many hardware upgrades such as sport-tuned suspension, bigger brakes, a throatier exhaust system, and a more powerful engine. The result is a pint-sized hatchback with a meaner attitude than its seemingly adorable looks would suggest.

The engine produces 231 horsepower and 236lb-ft or torque, which is enough poke to deliver properly quick acceleration. Fortunately, it’s never more than sharply-tuned chassis can handle. With its quick steering and buttoned-down suspension, the John Cooper Works feels wonderfully nimble and tossable when hustled. The combination of firm suspension and rock-hard runflat tires means that the ride quality is rather brittle, but the handling capability you get in exchange makes it a worthwhile trade-off. I’d prefer the standard 6-speed manual gearbox over the available automatic that my tester came with, but either way, this is a seriously fun little hatchback. 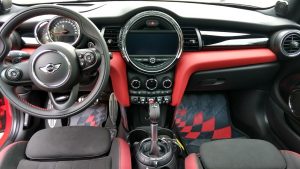 For those who aren’t satisfied with the performance of the standard package, Mini offers a range of John Cooper Works Pro Parts and Accessories to take things to the next level.  Along with many cosmetic add-ons, my test car came equipped with the available JCW Pro Exhuast, which includes a dual-mode exhaust system with a Bluetooth controller. In the standard sport mode, the exhaust note sounds appropriately throaty. Track mode, however, really clears the throat and unleashes a nasty bark that should wake up the bystanders. The pops and bangs on the overrun are reminiscent to those of an Jaguar F-Type at full chat.

The 3-door John Cooper Works has a reasonable starting MSRP of $33,990. A mere sneeze at the vast options list, however, can easily inflate that price tag to well over 40 grand. At that price point, it’s hard to ignore the attractive hot hatch competitors, which include the Ford Focus RS and Honda Civic Type-R. The wildly entertaining Ford Fiesta ST can be had for thousands less as well. Those dead-set on the Mini should exercise restraint with the available options. The money saved would be better spent on a good extended warranty, which is considered a must for long-term ownership given the shaky reliability history and high repair costs associated with Mini models.

Mini ownership certainly isn’t cheap, and it’s even less so in the case of the John Cooper Works. In essence, what you’re getting is a small, front-wheel drive BMW, with most of the premium-brand benefits, and even more of the costs, that come with it. For roughly the same money, I’d personally take an actual BMW. More specifically, a 230i coupe with a 6-speed manual, which would deliver just a much fun in a more upscale package. A sensibly-optioned Cooper JCW 3-door with a few cool add-ons and an extended warranty would be an appealing package as well. Just go easy on those extras.