This is an all-new 2018 Chevrolet Equinox from the ground up-not just a refresh.

It is the third generation of the vehicle.

And the best one yet.  The most improved.

The weather is now starting to improve and the summer beauty of the region is just beginning to appear.

There are three engines available: as of writing and the only one we tested and that was available: the 1.5L turbo gas.  Two others will be available later in the year-a 2.0L gas turbo and a 1.6L turbo diesel in the fall.

There will be a price premium for each of the other two optional engines. 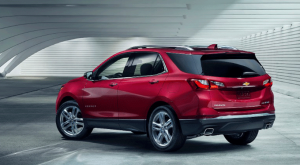 There are three trim levels: the LS, the LT and the top-of-the-line Premier.  All trim levels come with either FWD or AWD.  The AWD on all trims is switchable.  The base model is not barebones as it comes with push button start, 7” screen, heated seats and wireless audio streaming.  There will also be a Redline version with cosmetic add-ons.

The packaging is intentionally kept simple for buyers.  The LS has a 7inch touch screen display, rear camera and even heated front seats. There are no options or extra packages on the LS.

The LT has two packages: the Confidence and Convenience and the True North package. The Confidence package includes a nice leather steering wheel, drivers’ assists including rear cross traffic alert and lane change alert and dual zone air conditioning and a power liftgate.  The True North package adds among other items a full roof panoramic sunroof with separate power sunshade, and Chevy MyLInk.

For the mainstream buyers there is value here and the LS can be had with more equipment for less money than say a Toyota RAV 4 and a Honda CRV or last year’s 2017 Equinox.  The value proposition remains good through all the trim levels but somewhat less so at the Premier model level but still competitive compared to its rivals in the market.  In addition, there is more value in the new 2018 model compared to the 2017 model.  For example, the 2018 mid-level LT comes with rear seat release lever in the cargo area.  You pull the lever in the cargo area and the back seats fold down.

Interesting to buyers and worth noting is the improvement of the residual value of this Chevy vehicle.  It is up from previous years and “in the game”.  This will be especially important to customers who lease their vehicles.

For example, in Canada, the main and most obvious domestic competitor would be the Ford Escape. Through all trim levels, the new 2018 Equinox holds its value a bit better than the Ford Escape.  After 4 or 5 years (which are the most common lease terms and loan periods) the 2018 Equinox is only slightly behind the Rogue and RAV4 but ahead of the Escape. The new Chevy does better than all models in the 2 and 3-year lease term periods.

This is an important factor when considering your monthly lease payment amounts and trade-in value.  And not to be forgotten by customers.

The new Equinox is about 5 inches shorter and 400 pounds lighter than last year’s. But, rear cargo space and passenger space is almost the same as the bigger 2017 model.  I noted about 7.8L per 100 km in real world driving on the highway with the 1.5L turbo.  Pretty Good.  The torque and mileage champ will most certainly be the upcoming diesel with combined mileage of 7.6 L per 100km. and, according to Chevrolet, the best in the class.

I found the SUV to be what most mainstream buyers would want.

It felt light on its feet with an independent rear suspension; it handled the curves well in wine country and provided the acceleration most drivers would need.  Its acceleration was adequate; but it was not fast. The 2.0L and diesel would be interesting to compare when they arrive.

The ride was comfortable; the steering lacked some center-on feel.  It has sound deadening speakers at the 0-handles to cut down on noise and was fairly quiet except on hard acceleration.

The new design was handsome, mainstream and reserved.  It is a refined look without breaking any new ground. It especially looked good in white and the white and silver exterior door handles reminded me of a smart phone.

The interior was nice and comfortable but not stunning.  It could do with more soft touch materials on the dash and the upper door panels across the front windows. The Premier has a bit more padded dash materials and stitching and leather seating.  All Models had bright work around the vents but less hard plastic through the model range would be a plus. An interesting touch was the frameless touch screen.

If the redesign was meant to place the Equinox squarely among the other compact SUVs in the market, it hit its target.

For family buyers looking for a solid mainstream versatile compact family hauler that won’t break the bank, I would put it on the list.  At the end of the day, test drive and compare it with the others in the market and make up your mind.  There is now so much on the market in this compact SUV segment.

It may not be first on my list (that would be the Mazda CX-5 for looks and driving enjoyment) but it’s definitely worth a look.  And a much closer look than the outgoing 2017 model.