As recently as the turn of the millennium, the concept of making a world-class automobile was as foreign to Kia as building a smartphone is to Microsoft. That all changed though when Kia and its parent company Hyundai got serious and began sniping top-notch designers and engineers from other automakers such as Toyota, Audi, and BMW. With a diverse international team consisting of some of the best in the industry, the move paid off big time to the point where Kia is now confident enough to take on the luxury brands with a sport sedan of their own. Say hello to the Kia Stinger.

What’s important to understand here is that the Stinger isn’t some half-baked attempt to play catch-up or copy-cat with an economical price tag as its only saving grace. This is a well-designed and thoroughly engineered disruptor that makes you seriously question the point in spending thousands more on an upscale German sport sedan. It shows that Kia is done with its second-rate image and dead serious about offering world-class products that have no problem throwing punches with the best of them. 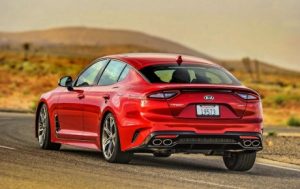 Help delivering that punch is a twin-turbo 3.3L V6 engine that produces 365 horsepower and 376 lb-ft torque. With the help of a smooth 8-speed automatic transmission and standard all-wheel drive, the Genesis-derived engine has enough grunt to manage a properly quick sub-five second 0-100km/hr time. It certainly feels eager with a pleasant exhaust note to match. The transmission has paddle shifters, however, it doesn’t stay in manual mode for long and the gear changes aren’t really quick enough to justify their use over the regular automatic mode.

Albert Biermann from BMW’s M Division was tasked with making the Stinger a proper handler that’s as good to drive as the German heavyweights. Countless miles of Nurburgring track time and fine-tuning have resulted in a dialed-in chassis that delivers the refinement of a grand-touring car along with a bit of sport sedan finesse. Despite its considerable size and weight, the Stinger manages to feel composed and planted when hustled through corners. The steering is precise and the four-piston Brembo brakes have a strong, predictable feel as well. Dial it back a notch, and it manages to maintain a good level of ride quality with impressive sound suppression. The Stinger never forgets that it’s a GT car before a sports sedan.

It’s a rare thing for a car to make it from show stand to showroom virtually untouched, yet that is exactly what has happened with the Stinger. From its aggressive front facia to the cool wrap-around tail lamps, the Stinger is easily the most dramatic, eye-catching car that Kia has ever produced. It will attract plenty of “that’s a Kia!?” remarks from onlookers. Things are significantly less dramatic, however, on the inside, with a look and feel that’s convincingly upscale, but still a notch below that of premium-brand competitors. Rearward visibility is also compromised by that sleek sloping roof line. With dimensions that are more midsized than compact sized, the Stinger does fair well when it comes to interior volume. There’s plenty of room for four adults to sit comfortably, plus a spacious cargo area with a large hatch. 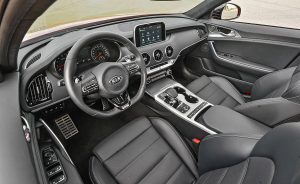 It may seem improbable that Kia, a brand traditionally known for entry-level economy cars, could build a stylish, upscale sport sedan capable of luring away Audi and BMW buyers. Indeed, brand perception, along with the consumer’s general disinterest in sedans in favour of crossovers, seem to be the Stinger’s greatest obstacles. Both factors may hinder its prospects at becoming any kind of sales hit, but there’s no question that the Stinger is a thoroughly engineered and exceptionally well-rounded sport sedan. It doesn’t necessarily bring anything new to the segment long established by the luxury brands. In fact, in many ways, the Stinger is actually quite derivative. What it does do, however, is offer an equally compelling, if not superior, package at a price point that leaves the luxury brands nothing but a fancy badge as their selling point. For their sakes, they better hope that badge snobbery never dies.