It’s no secret that Tesla is a bit of a posterchild for the electric car movement. Despite significant inroads on EV technology from larger mainstream automakers, Tesla is the one dominating the spotlight. The small California-based upstart has achieved the once unthinkable with attractors from eco-conscious early adopters to Wall Street investors and just about everyone in between. Elon Musk’s brilliant marketing ability no doubt plays a huge role here, but the product on offer is nothing to scoff at. Tesla managed to be the first to introduce a hugely desirable, long-range, viable electric car in the form of the Model S. That’s a milestone a few large automakers surely wish they had under their belt.

Since its introduction in 2012, the Model S has been subject to consistent improvements and software updates aimed at keeping it fresh and relevant next to conventional luxury sedans from Mercedes, BMW, and Audi. The latest model follows the family formula with a distinctive grill-free front facia, cool retractable door handles, and a slick profile with an ultra-low drag coefficient. It’s a familiar shape and perhaps a little long in the tooth, but still no less attractive.

Step inside the cabin and eyes are immediately drawn to the massive tablet-like screen that makes up the instrument panel. Though overwhelming at first, and a little distracting in some areas on the move as well, the touchscreen does eventually begin to make a good deal of sense. Popular functions such as music streaming, radio station selection, and navigation inputs are logically arranged and settings for just about everything else seem endlessly customizable. I really dig that it has a sort of timeless quality to it, as Tesla’s over-the-air software updates means that improvements are constantly in the pipeline. The rest of the interior is comfortable and spacious, though nowhere near as opulent or well-assembled as what you’d find in a comparably priced Mercedes S-Class or Porsche Panamera. 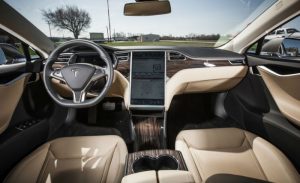 One feature you most certainly won’t find in either of those models, however, is the much-hyped Ludicrous Plus mode, which turns this understated four-door sedan into a genuine hypercar slayer. Unique to the P100D and available beyond the already ridiculously fast Sport and Ludicrous modes, Ludicrous Plus is activated by holding down the Ludicrous mode icon. After a cool hyperspace style animation and selecting the “Yes, bring it on” icon over the “No, I want my Mommy” one, the world’s fastest accelerating sedan is ready. Try as you might to prepare yourself for the nausea-inducing rocket thrust about to come, there’s really no use. All you can do is hold on for dear life as your neck snaps back and your melting brain attempts to comprehend what is happening. It’s an unbelievable thing to experience and more than a little scary.

Even with the overkill Ludicrous mode disengaged, instantaneous acceleration is never more than a light pedal movement away. Despite a largely aluminum-based architecture, the Model S remains a heavy vehicle. Even so, body motions are kept well in check thanks to a very low centre of gravity generated by the skateboard-like battery pack in the floor of the car. Ride quality is smooth, though not on the same level as comparable six-figure luxury sedans. It wins points back, however, with the unparalleled refinement of its inherently smooth, silent drivetrain operation that remains the electric car hallmark.

Tesla claims that the Model S P100D can travel roughly 500 kilometres between charges, which is enough to mostly eliminate the typical EV range anxiety. Naturally, variables such as aggressive driving and cold weather can shorten that range significantly. Unlike rivals, Tesla offers a comprehensive Supercharger network that allows for quick charging between major city routes. Even so, like long charging times, a lack of charging infrastructure within major cities remains an issue, which means that owners will be heavily reliant on at-home charging. Doing so, however, is no bother thanks to a clever Tesla App that allows you to monitor and control the vehicle, including the ability to precondition the cabin temperature while plugged in before drives.

The Model S range starts with the 75D, which has an EPA-estimated range of 416km and a $96,650 starting price before options, fees, and incentives. The 100D model ups the range to 539km and the price to $122,000. The P100D gets a slight drop in range to 507km but additional performance and a standard premium interior upgrade for a price of $176,000. Cool options include a pair of rear-facing child seats in the cargo area ($5,600), which effectively turn the Model S into a 7-seater. The enhanced autopilot ($6,600) and full self-driving capability ($4,000) allow for hands-free driving and automatic lane-changing at highway speeds. It works surprisingly well, although Tesla still requires the driver to be in control at all times.

There’s no doubt that the P100D is a hugely expensive luxury sedan. It’s certainly debatable whether the additional straight-line performance is worth a near 50 grand premium over the already ridiculously fast 100D model. And yet, look elsewhere in the market and you simply won’t find anything else like it. Whichever model you look at, the Model S remains a unique, highly desirable offering in the luxury segment, and its popularity reflects that. Long-established luxury stalwarts from brands like Mercedes and BMW will need to reflect and re-evaluate their strategy if they are to regain their stronghold. Tesla has hammered its flag at the top of the luxury car mountain with its cutting-edge Model S, and it’s waving proudly.