The Genesis brand is a fresh and somewhat unfamiliar entry into the luxury car market, though perhaps not entirely as fresh as some may think. Parent company Hyundai tried its hand at luxury cars with models such as the Equus and Genesis sedan. And yes, confusingly enough, the Genesis was once both a Hyundai-branded luxury sedan and sports coupe. The move to creating a standalone brand is one that will require an enormous amount of resources and fortitude to get right. In order the play the luxury game properly, Genesis is taking the small, exclusive luxury route with a handful of carefully-crafted, though not entirely new, models, similar to how Lexus got its start in the 1990s. The model charged with leading the range is the full-sized Genesis G90.

In terms of both sheer size and road presence, the G90 just about matches any competing flagship luxury sedan. The design itself is somewhat derivative of other luxury makes, but there’s no question that the overall look is clean, upscale, and exudes a sense of opulence. The massive front grill, intricate headlights, and beautifully designed wheels are just a few of the striking details which help the G90 exude flagship status. Be prepared to explain what it is when confused onlookers begin questioning the unfamiliar Genesis winged-badge. Even so, I did have one onlooker ask whether it was a new Bentley, which is about as good of a compliment as Genesis could ask for. 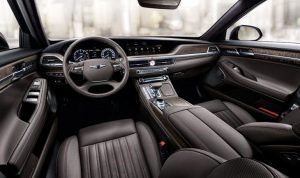 The richly-appointed interior combines finely stitched leather, real wood trim, metal finishes, and a micro-suede headliner to create an upscale, though understated, look and feel. The seats up front are incredibly comfortable and the rear seats offer limo-like accommodations. The right rear passenger can even power the front passenger seat forward for additional legroom. A myriad of controls and a large infotainment screen draw your attention to the centre stack. Though intimidating at first, everything is actually far more approachable and accessible than the tech-heavy systems you’d find in a Lexus or Mercedes. The display is sharp and easy to navigate with plenty of clear buttons located beneath to help ease distraction on the move.

The G90 comes fully equipped with features that include a 17 speaker Lexicon sound system, power sunshades, power-operated trunk, soft-close doors, a comprehensive list of active safety technology, and heated and ventilated seats that are up to 22-way power adjustable at all four outboard positions. Oddly enough, the G90 lacks a panoramic roof and massage functions for both the front and back seats, which seems like a major oversight in this class. And while the features list leaves little to be desired, it would be nice to see a bit more customizability in terms of colours, materials, and finishes. Buyers of a boutique-like luxury brand often expect a bit of individuality to help differentiate their high-dollar ride from the rest.

Thanks to liberal use of sound-absorbing materials, three-layer weather strip seals, and laminated acoustic glass on every window, the G90 is able to glide down the road in near complete silence and serenity. The ride quality is remarkably plush thanks to a softly-tuned adaptive air suspension. The G90 isn’t all that gifted from a dynamic standpoint, but the lack of any kind of sporty pretensions is actually quite refreshing. It’s just content with pampering its occupants in comfortable silence and nothing more. Isn’t that what luxury is about? 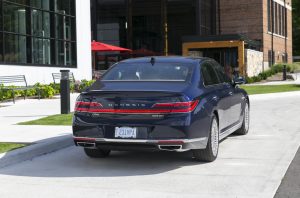 The G90 is powered by a naturally-aspirated 5.0L V8 engine producing 420 horsepower and 383 lb-ft of torque. The power isn’t quite as effortless as that of its turbocharged rivals, but the smooth, effortless power delivery and additional level of refinement just feel more appropriate in a large flagship sedan such as this. Power is delivered through a smooth-shifting 8-speed automatic transmission and an all-wheel drive system. Predictably, fuel economy for the week landed at a not-so-great 16.5L/100km in mixed city and highway driving.

As an executive luxury car, the G90 has just about nailed the formula, but how exactly does it differentiate itself from its highly accomplished competitors? That would be value pricing and the ownership experience. The all-in price of $89,750 significantly undercuts its main competitors. All Genesis models also come with an industry-leading 5 year or 100,000km comprehensive warranty that includes complimentary scheduled maintenance, map updates, and 24/7 roadside assistance. Genesis will even come to a location of your choice to pick up and drop off your vehicle for service. While it’s away at the service centre, a Genesis loaner vehicle will be left at your disposal. When it comes to delivering an ownership experience befitting a luxury brand, Genesis seems to have all the bases covered.

Some may be quick to dismiss the G90 as a second-tier luxury sedan for those who can’t afford a Mercedes S-Class. I think Tesla has shown us, however, that being a newcomer with virtually no pedigree isn’t necessarily a deterrent for luxury car shoppers. Rather than deviate from automotive norms and forge a new path with a distinct identity like Tesla, however, Genesis has chosen to take the conservative path and follow a mostly traditional formula. It may be a bit derivative and unoriginal, but it is one that a few pragmatic types who aren’t hung-up on the prestige of an established pretentious brand name will likely recognize and appreciate it.