Sometimes history has a funny way of repeating itself. By the late 1980s, the long-running BMW “shark nose” 6-Series came to the end of its production run and was replaced by the larger, more technically-advanced, V-12 powered 8-Series coupe. A few decades later, BMW has repeated history with the latest M850i xDrive. Though it is positioned near the top of the BMW model lineup, the 8-Series serves as a direct replacement for the 6-Series coupe, cabriolet, and four-door Gran Coupe. The shared history of inception, however, is about where the similarities end.

The original 8-Series was a real looker. With its sleek profile, pillarless windows, and unmistakable flip-up headlights, it had a classic elegance to it like few other cars of its day. The new 8-Series, by comparison, maintains the same high-end coupe aesthetic but in a far more aggressive, sculpted shape. My favorite detail is the slick, narrow headlights which use BMW’s impressive LaserLight technology. It’s unquestionably stylish, but perhaps a bit too similar in appearance to the 6-Series it replaces, and not nearly as timelessly pretty as the first generation model. 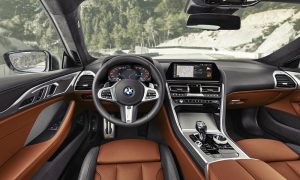 The interior is a rather impressive space with plenty of wow factor in terms of features and technology. The latest iDrive infotainment system is graphically pleasing and relatively easy to navigate, with the option of gesture control or voice commands similar to that of Siri. The digital gauge cluster is visually appealing as well, but not nearly as easy to read as traditional round analog gauges. The materials and finishes are appropriately upscale with excellent build quality, although it lacks the overall specialness of the Mercedes S-Class coupe or Lexus LC 500. Interior space is also quite limited given the large exterior dimensions. The rear seats are especially cramped and seem to be tighter than that of the much smaller 2-Series coupe.

Despite being a grand tourer, the M850i sounds and feels more like a full-on sports car. The steering is sharp and responsive to inputs. Body movement, particularly in Sport mode, is very well controlled despite the significant curb weight. Large grippy tires and a rear-biased all-wheel drive system help ensure traction and stability while ripping around corners. The M850i feels sporty to point where the comfort end of the equation may be put into question. The ride quality is definitely on the firm side and selecting Comfort mode doesn’t help things all that much. BMW has been looking to reestablish their reputation as a builder of proper driver’s cars, something that had been lost on the previous generation 6-Series, and the M850i certainly feels like a step in that direction.

The drivetrain takes power and performance to a point where it really begs the question: Is a full-on M version really necessary? The twin-turbocharged, 4.4L V8 produces 523 horsepower and 553 lb-ft of torque, good for a 0-100km/hr blast in only 3.7 seconds. Those are the kind of numbers that would embarrass a V10-powered M6 from a few short generations ago, and the immediacy of the acceleration seems to confirm that. The V8 pulls strong with relentless thrust well into triple-digit speeds as the 8-speed automatic transmission delivers shifts with dual-clutch like rapidity. It even emits a satisfying snarl with pops and bangs in Sport Plus mode, yet it can go whisper quiet if desired just by cruising around calmly in Comfort mode. 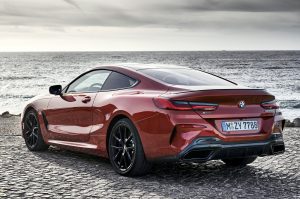 With a starting MSRP of $123,500, the M850i is neatly positioned between the $102,750 Lexus LC 500 and the $156,100 Mercedes S 560 4MATIC coupe. The Lexus is the most visually striking of the lot with a beautiful interior, charismatic naturally-aspirated V8 engine, and a surprisingly sporty driving experience. The Mercedes is the pure luxury car choice with the most opulent interior and refined ride quality. The M850i, by comparison, follows the formula of the Lexus, only with next level power and performance, but at a higher price point. If performance and driving dynamics are the focus, the Jaguar F-Type and Porsche 911 are both worthy alternatives as well, but are less optimized for grand touring.

Any car at this price point has a lot to live up to. There’s no question that the M850i is far grander and more capable than the 6-Series that came before it and the original 8-Series before that. The fact that a full-on M version in the form of an M8 will be available seems rather bonkers given the incredible performance already on offer. We have a long way to go to see whether time will be as kind to it as it was to the first generation model, but in any case, M850i is a thoroughly desirable grand tourer that’s worthy of the 8-Series name.