Back when Acura was in its heyday, they were known for building some pretty cool cars with surprising performance credentials. Those who purchased one were rewarded with Honda-like reliability in a package that was nearly as upscale and sporty as the equivalent BMW. Today though, Acura is a work in progress with a lineup of mostly uninspired models, some of which are teetering on irrelevance. The appeal is largely aggressive pricing and value for money more than anything else. The cars are still good, but a bit lacking in that charm and magnetism that they were once known for.

The latest RDX seems to be a strong effort towards reversing this trend. It harnesses some of the dynamism and sporty character from Acura’s past while fully embracing our technology-laden, crossover-crazed times. The exterior design is attractive and quite bold for a crossover. The A-Spec trim in particular comes with some pretty sporty touches including aggressive-looking front and rear styling with blacked-out trim and 20 inch wheels with a dark graphite finish. 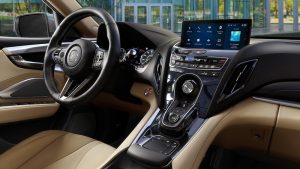 The interior is just as appealing with high quality materials and attractive details befitting its price point. There’s plenty of room for four adults to stretch out plus a spacious cargo area. Up front, Acura’s long-despised dual-screen infotainment system has been replaced with a single 10.2 inch high-graphic display which is controlled using a touchpad on the centre console. Though an improvement over the previous interface, the system is still a bit too distracting to use on the move and in need of more shortcuts for commonly used tasks. Other quirks include the push-button gear selector, which takes some getting used to, and the huge dial for the different drives modes. Why does a rarely used feature such as this need to take up so much valuable real estate space on the instrument panel?

Playing with the dial uncovers four different modes: Snow, Comfort, Sport, and Sport+, each of which alters the throttle response, gear changes, steering feel, and, on the top Platinum Elite trim, firmness of the adaptive suspension. Sport is the default setting and reveals a rather capable chassis with good body control and fairly agile cornering ability. Much of that can be attributed to Acura’s sophisticated Super Handling All-Wheel Drive (SH-AWD), which is capable of shifting torque to the appropriate wheel to sharpen the handling. The ride quality is perhaps a tad firmer than most in this category, but it’s an acceptable trade-off for the newfound sportiness.

Powering the RDX is a turbocharged 2.0L 4-cylinder which produces a healthy 272 horsepower and 280 lb-ft of torque. It’s a willing engine with plenty of low-end torque for quick take-offs. Urgent demands for power, however, require a moment of patience thanks to a 10-speed automatic transmission that can be a bit slow to drop a few gears when needed. It performs fairly well though when driven in a more relaxed manner. In terms of fuel economy, I averaged about 12.5L/100km in the city and 9.0L/100km on the highway, which is on par with most rivals. Premium fuel is recommend, but regular is permitted, which is a rare bonus for a luxury vehicle. 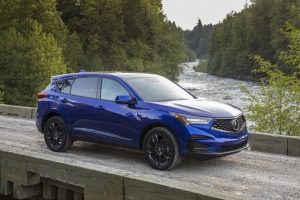 Affordable indulgence has long been an Acura strong suit, and the latest RDX is no different. Pricing starts at $43,990 and includes features such as a panoramic sunroof, power tailgate, and a comprehensive list of driver-assist safety technology. At $50,290, the A-Spec trim seems to hit a nice sweet spot between offering a sporty appearance matched with added features like ventilated seats, a heated steering wheel, premium sound system, and nice alcantara trim. Even with every feature packed in for $54,990, the top-dog Platinum Elite still significantly undercuts its competitors by a good margin.

Like the larger MDX, the RDX has proven to be very popular with consumers thanks to a combination of spaciousness, build quality and value for money that’s hard to beat among luxury crossovers. Even though the latest model demonstrates a renewed interest in sportiness and driving dynamics for the brand, ultimately its appeal still comes from its more sensible qualities. Whatever the actual draw is, the RDX is a solid offering and an easy recommendation in the luxury crossover segment.