The Range Rover represents the genesis of the luxury SUV. As ubiquitous as they are now, every single luxury SUV on the market owes its existence to the Range Rover. It was the first 4x4 designed to be just as capable on-road as it was off-road, a hallmark that has been maintained through each and every generation. Today, the iconic nameplate’s following is as strong as ever, with owners ranging anywhere from first world soccer moms all the way up to Her Majesty the Queen. More importantly, it remains the quintessential luxury SUV with a pedigree like no other.

Much like the Porsche 911, the Range Rover has largely maintained its iconic design through every generation. The original model was held in such high regard that it became the first car to be featured in the Louvre as an “Exemplary work of Industrial Design.” Though more sophisticated in its details, key design elements such as the unmistakable silhouette, floating roof, continuous waistline, clamshell hood, and split tailgate have remained intact since the model’s inception in 1970. The latest model may have been softened and modernized, but there is no mistaking it for anything other than a Range Rover.

Opening the huge doors reveals an interior dressed in only the most sumptuous materials. The use of fine leather, wood, and metal trim covering just about everything is all sublime. The seats are like luxurious armchairs perched high up for an unbeatable commanding view of the surroundings. As impressive as it is, it’s obvious that the utilitarian subtleties that were once a Range Rover hallmark have caved in the pursuit of ultimate luxury. The chunky buttons and knobs that could be operated while wearing gloves, for example, have long since been abandoned and replaced by trendy touchscreens. It’s all beautiful to look at, but quite distracting to use on the move. 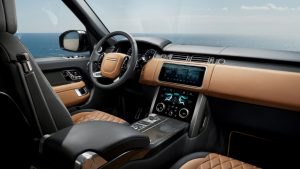 Fortunately, the adoption of new technology hasn’t compromised the off-road ability. In 1972, the Range Rover became the first vehicle to cross the perilous Darien Gap as part of an 18,000-mile Trans-America expedition to prove its worth on treacherous terrain. Needless to say, expectations for off-road performance are quite high. Despite the fact that very few will ever see a path more treacherous than a gravel road, the Range Rover is more capable now than ever before.  A twin-speed transfer case, height selectable air suspension, and an advanced Terrain Response system come standard, allowing for impressive off-road feats such as wading through 900mm deep water. Good luck trying that in an Audi.

The current generation Range Rover is the first to use an all-aluminum monocoque responsible for shedding up to 400kg of weight when compared to previous versions. Despite a still significant curb weight and generously long wheel travel, it remains surprisingly stable gliding down the road with respectable body control while cornering. The ride quality is impressively plush as well with good isolation from poor road surfaces. The highlight though is being able to rest your arm on the door, look out through the tall windows with their excellent visibility, and enjoy that all-conquering feeling of sitting up high piloting a Range Rover with its commanding road presence.

The Range Rover is available in either short wheelbase form or long wheelbase which adds additional rear seat legroom. Most versions get a 5.0L supercharged V8 producing at least 510 horsepower and enough torque for sports car-like acceleration. The entry-level short wheelbase HSE model, however, offers a choice between a plug-in hybrid drivetrain and a 3.0L TD6 diesel engine tested here. Producing 254 horsepower and a robust 443 lb-ft of torque, the diesel offers more than enough performance combined with a surprisingly high level of refinement. The 8-speed automatic transmission encourages it to spin at low rpms where it just hums along smoothly for effortless cruising while delivering impressive fuel economy. Over 500km of mixed city and highway driving, I averaged 10.5L/100km in mixed city highway driving, which is remarkably efficient for a big heavy 4x4.

Short wheelbase models begin at $113,000 whereas long wheelbase version start at $124,500. With the diesel engine and a handful of option packages, my test car came in at $128,440 before fees and taxes. Going with a long wheelbase model in SV Autobiography trim will stretch the price tag to an eye-watering $233,000. In addition to a 557 horsepower supercharged V8, that model receives executive-level features such as quilted semi-aniline leather seating with hot stone massage settings, powered close rear doors, deployable leather-finished tables, front and rear refrigerators, and luxurious Mohair floor mats with leather binding.

The Range Rover has become a genuine alternative to the executive class flagships from the likes of Mercedes and BMW, and the enormous price tag reflects that. Having said that, the Range Rover is arguably the most all-around capable luxury vehicle on the market. The more time you spend with it, the more you appreciate how impressive it is. No other 4x4 manages to offer such a high level of off-road capability, sumptuous luxury, and comfort, while making the driver feel so special from being the wheel. Decades of progress have resulted in the Range Rover becoming the ultimate luxury 4x4, and that’s a title that isn’t likely to change anytime soon.