Nissan had been at the subcompact crossover segment longer than most when it introduced the oddly-styled Juke back in 2010. With a design that was presumably inspired by some kind of hideous insect, the Juke was easily one of the most ridiculous looking vehicles of its day. Being different can pay dividends, but in the case of the Juke, the weird looks weren’t enough to sustain its popularity beyond a single generation. Still, small crossovers are hot sellers, which why it didn’t take long for Nissan to move in with a replacement.

The Kicks represents the entry point to the Nissan crossover family, sitting below both the Qashqai and Rogue in terms of size and price. Compared to its Juke predecessor, the Kicks adopts far more conventional-looking sheet metal with larger dimensions and increased interior space. Size-wise, it appears to have about the same footprint as the competing Kia Soul and Toyota CH-R. Compared to those models, the Kicks shares an interesting colour palette with a few vibrant two-tone options to add a bit of visual excitement. In what may be a deal-breaker for some, it also mimics their front-wheel drive only configuration with no all-wheel drive option. 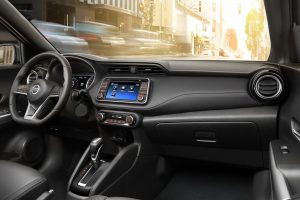 The adventurous exterior styling is matched with an interior packed with features and interesting visual elements. The instrument panel consists of a floating 7 inch touchscreen display flacked by buttons and knobs for distraction-free driver inputs. The seats are Nissan’s ultra-comfortable “Zero Gravity” design with memory foam, and can be had in standard fabric or an available “Prima-Tex” synthetic leather material with orange stitching. Passengers get a generous amount of room with a flat floor design that allows three to sit across the rear bench in reasonable comfort. The cargo area is a useful size as well, however, the folding backseats do leave a significant hump which may create a challenge for loading some longer objects.

Unfortunately, the Kicks is quite literally held back by its feeble 1.6L naturally-aspirated 4-cylinder engine and CVT transmission. Producing a barely adequate 125 horsepower and 115 lb-ft of torque, the engine isn’t happy doing much beyond laidback cruising. That’s fine around the city, but trying to merge onto a freeway with cars flying by can be a struggle. The Kicks feels most at home on city streets where the lack of power or all-wheel drive are more of a non-issue. The one upside to the modest drivetrain is impressive fuel economy. The Kicks is rated for 7.7L/100km city and 6.6L/100km highway, making it one of the most fuel efficient crossovers on the market. 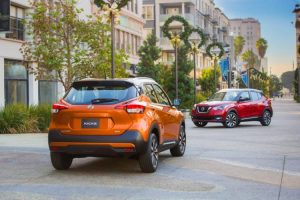 Along with its cheerful appearance, practical layout, and impressive efficiency, the real draw to the Kicks is outstanding value for money. For a starting MSRP of $17,998, the entry-level S model includes features such as a touchscreen display with Siri, Bluetooth, audio streaming, and backup camera, push-button start, 3 USB ports, and even automatic emergency braking. The $20,898 SV models adds intelligent keyless entry, heated seats, Apple Carplay and Android Auto compatibility, and 17 inch alloy wheels. The model range tops out with the $22,798 SR model adding an intelligent around-view monitor, blind-spot warning with rear cross traffic alert, Prima-Tex seat trim, remote engine starter, LED headlights, and even a Bose sound system with speakers in the driver’s headrest.

All things considered, the Kicks is an attractive package that ticks most of the must-haves for bargain-priced crossover shoppers. My sense is that most will easily be willing to overlook the lack of performance or all-wheel drive in exchange for its charming looks, impressive efficiency, generous space, and outstanding value for money. When it comes to offering the most for the least amount of money, buyers will be hard-pressed to find a crossover that does it better than this.