Subaru largely built its reputation as a fringe brand with a lineup of solid, but slightly quirky, vehicles that appealed to adventure types looking for something a little bit different from the norm. These days, however, Subaru is riding on a wave of popularity and increasing mainstream appeal. The result is that its lineup has become fairly ordinary, but no less capable and adventurous with solid offerings that include the Crosstrek, Forester, and Outback. The Ascent builds on the qualities of these smaller models while offering Subaru fans a genuine three-row crossover option.

The Ascent should help satisfy the demand for large, capable crossovers suited to growing families. It looks like a scaled-up Forester with the same simple, rugged look, but little actual styling to speak of. The real draw is the spacious, versatile interior with three rows of seats, room for up to eight occupants, and plenty of useful features. The controls are straightforward and intuitive with an easy to use infotainment system that is compatible with Apple CarPlay and Android Auto. The interior is also filled with thoughtful storage solutions and the most cup holders of just about any vehicle. Overall, it’s a well-designed space, but not quite as appealing as the best in class offerings such as the Kia Telluride. 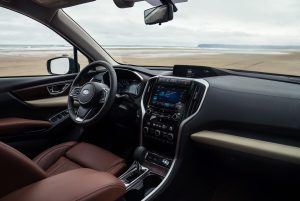 The driving experience is well-sorted and comfortable with good overall ride quality. Like every other Subaru crossover model, symmetrical all-wheel drive with X-Mode comes standard offering a safety net for a bit of off-road antics or poor weather conditions. The turbocharged 2.4L 4-cylinder engine produces 260 horsepower and comes matched to a continuously variable transmission (CVT). It provides adequate power and has an impressive towing capacity of up to 2,270 kg. On the flip side, the drivetrain is a bit on the crude side when pushed. It also doesn’t offer any noticeable fuel economy benefit in exchange for the downsizing and turbocharger setup when compared to a less complicated naturally-aspirated V6 engine. I averaged about 12.0L/100km in mixed city and highway driving.

Where the Ascent has a distinct advantage over many of its competitors is pricing. The entry-level Convenience model has an attractive MSRP of only $36,695. This includes all-wheel drive, three-zone climate control, heated seats, power adjustable driver’s seat, STARLINK infotainment system with a 6.5 inch touchscreen, and Eyesight active safety features such as Adaptive Cruise Control, Pre-Collision Braking, Lane Keep Assist, Vehicle Lane Departure and Sway Warning. Most of the Ascent’s rivals command at least four to five grand more for a similar specification. Even the top-of-the-line $50,995 Premier model undercuts most of its rivals in top trim by a few grand. At that price point, however, many of the Ascent’s rivals offer a more feature-packed and upscale package that justifies the upcharge. 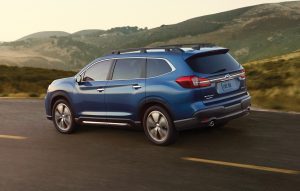 The Subaru Ascent doesn’t beat its rivals in many areas, but, as an overall package and for the price point that is being offered, it still makes a strong case for itself, particularly in base form. Subaru’s have traditionally been well-known for their ruggedness, safety, strong reliability and resale value rather than value for money and bargain pricing. The Ascent, however, delivers on the traditional Subaru strong suits while offering a slightly more aggressive price than rivals such as the Toyota Highlander, Honda Pilot, Volkswagen Atlas, Kia Telluride, and the Hyundai Palisade. For Subaru fans, and for families focused on pure sensible checkpoints, that might sound like an ideal match.