The first generation CLA was originally introduced as a stylish, semi-affordable entry-point to Mercedes-Benz ownership. Despite common criticisms for a rather low-grade cabin, lack of features, and an unrefined driving experience, the allure of its eye-catching styling and a Mercedes badge made it a sales success. Now into its second generation, the latest CLA is out to prove that its talents go far beyond stylish looks, attractive monthly payments, and a three-pointed star badge on the grill.

With the A-Class now serving as the affordable entry-point to the Mercedes lineup, the CLA is now positioned as a slightly more premium, sportier, style-driven alternative. Part of the four-door coupe family which also includes the far pricier CLS, the CLA maintains a sleek, elegant look that’s sure to lure in plenty of buyers. Despite its sloping roofline and modest size, interior space is pretty respectable with just enough room to fit four adults in reasonable comfort. Taller riders may feel pinched by the lack of rear seat headroom which is a consequence of that coupe-like, sloping roofline. 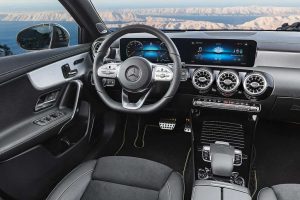 The stylish theme carries through to the interior with attractive finishes and high-quality materials. The many well thought-out details, including the available two-tone upholstery, metal-look trim, and the multi-coloured ambient lighting, come together to help create an eye-catching, upscale atmosphere. On the technology front, the infotainment system consists of a pair of high-res LCD displays which can be controlled through Siri-like voice commands, touchscreen, or touchpads on the steering wheel and centre console. It’s a visually attractive, feature-rich system, but one that’s also rather complicated, unintuitive, and distracting to use on the move. Thankfully, the system is compatible with Apple CarPlay and Android Auto which helps ease things a bit.

The CLA mostly lives up to its sporty appearance by delivering a rather sharp, playful, driving experience from behind the wheel. Body motions are kept well in check when hustling around corners, while the tight responsive steering adds a sense of precision and agility. On the downside, the ride is rather firm and noisy, making broken asphalt difficult to ignore. Different drive modes, including Eco, Comfort, and Sport, are available, but changing between them does little to improve the overall level of comfort.

The CLA 250 comes with a turbocharged 2.0L 4-cylinder engine producing 221 horsepower and 258 lb-ft matched to a 7-speed dual-clutch automatic transmission. With the sure-footed grip of a standard 4MATIC all-wheel drive system, the CLA can hustle to 100 km/h in a rather swift 6.3 seconds. Though smooth and powerful, the engine is sadly compromised by a jarring engine start-stop system that you’ll want to disable on every drive. The transmission is also prone to the occasional low speed gear-hunting and jerking that is often characteristic of dual-clutch units. Fuel economy, however, is decent as I was able to achieve around 10.0L/100km in mixed city and highway driving. 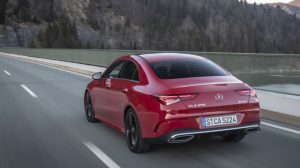 The CLA 250’s starting price of $43,000 places it directly between its entry-level brother, the A-Class, and the larger C-Class Sedan. Add a few desirable options and it becomes easy to spec a CLA well into C-Class territory. For those seeking thrills and high-level performance, the CLA 35 and CLA 45 AMG variants are available at even higher price points. Competitors in this price range include the BMW 2-Series, Lexus IS, and Acura TLX. Due to the potential for high out of warranty ownership costs, the CLA is best considered as a three to four lease option as opposed to a long-term ownership prospect.

It is safe to say that the CLA is no longer positioned as the affordable Benz alternative to a top-of-line mainstream car brand. Although the technology and driving experience have a few rough edges, there’s no question that this is a premium offering worthy of its three-point star. Forgoing entry-level status has helped the CLA become fully-formed member of the Mercedes-Benz lineup that makes no compromises for its lower price point.