With each passing generation, competing automakers launch new models promising greater levels of technology, capability, and performance. There are many so-called GT cars priced in the six-figure range which make these claims, however, the traits they share, such as big horsepower, numb turbocharged engines, and vast amounts of pampering technology, far outweigh the things that make them special. As far as GT cars are concerned, the Lexus LC 500 is special incarnate. Unlike the myriad of anesthetized rivals which make a fleeting attempt at driving engagement, the LC offers something truly authentic and far more spellbinding.

It begins with the looks and there is no other way to put it other than to say that it looks simply drop-dead gorgeous. The design is pure concept car that has made the transition from show stand to asphalt perfectly intact. It commands attention and draws eyes everywhere it goes comparable to something like an Aston Martin or McLaren. Only this isn’t some kind of wildly high-priced exotic with an MSRP rivaling that of a decent condominium. This is a Lexus. 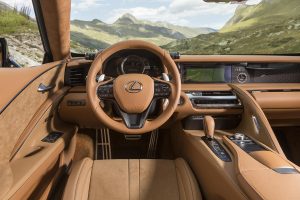 The interior is just as stunning and every bit as opulent as what you would find in a top-end Mercedes or BMW flagship. The materials and craftsmanship are top notch and have that obsession to detail quality for which Lexus is well known. The comfortable and supportive seats are perfectly positioned in front a nicely designed steering wheel and digital instrument cluster which has a cool LFA-inspired look to it. The centre controls are effective for commons tasks, although the infotainment system remains just as distracting to use here as in other Lexus models. There is a decently-sized trunk and two back seats, however, two adults would predictably struggle to fit back there.

As beautiful as the LC is to look at and sit inside, it is the driving experience that really gives it its allure. The root source of that is the naturally-aspirated, 5.0L V8 engine under the hood. Where rivals have all moved to soulless turbocharged engines with muted tones and absurd amounts of power that will cause you to lose your license in no time, the LC stands tall as the last holdout to the free-breathing power plant. The result is an exciting and enthralling character that needs to be experienced to be appreciated. The throttle response is crisp and immediate with a linear build up to a peak at 7200 rpm. The sound it makes along the way is just plain magical with a pure, snarly tone that a turbocharged engine could only dream of matching. No artificial pops and bangs to compensate for a muted sound here. All you get is the real deal. With 471 horsepower and 398 lb-ft of torque, the performance numbers are a bit tame by modern standards, but leave the horsepower wars to the German competition. 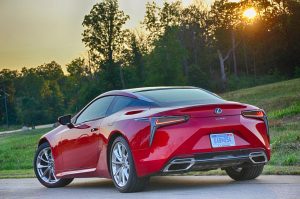 Backing up that engine is a rapid-shifting 10-speed automatic transmission which sends power exclusively to the rear wheels. Like the natural-aspirated V8, rear wheel drive is a rarity in the GT segment, but it helps give the LC a certain playfulness and sporty edge which its competitors lack. It takes corners with surprising poise and balance with very little body motions, while disguising its significant size and mass rather well. On the flip side, it also delivers a refined driving experience with excellent ride quality and solidity perfectly suited for a GT car.

At $103,050 to start, the LC 500 represents a tremendous value when compared to European rivals. A comparable BMW 8-Series or Mercedes S-Class Coupe can easily go for $140,000 or more. A Jaguar F-Type and Porsche 911 Carrera come a bit closer to the LC’s ethos, only in a more hardcore, sporty package. The LC 500 manages to blend exotic car looks, luxury car opulence, and sports car excitement into a one-of-a-kind package that’s just about unbeatable. Best of all, it manages to do so while maintaining an engaging soul and character that’s refreshing to find in a modern luxury car. If the internal-combustion era has hit its climax as many claim, I can’t think of a more satisfying, well-rounded protagonist.