When you think of a coupe, the image that comes to mind is likely some stylish, sporty-looking shape with two doors and not much in the way of practicality. In an attempt to broaden its appeal and become all things to all people, however, BMW has expanded their definition of a coupe to include a model with four doors. They call it the Gran Coupe, the idea being that you get practicality and mainstream appeal of a four-door sedan in a sleeker-looking, sportier package. It is a formula that has worked well for both Mercedes and Audi, so why should BMW be any different? Distinctiveness isn’t really a German thing these days.

Many would argue that BMW has sliced its lineup into so many different variants that the company has decidedly lost focus on what made it into the revered brand it is today. Still, dig deep enough through all the pseudo “Ultimate Driving Machines” and you can still find gleaming examples of that old-school BMW brilliance. The 4-Series Gran Coupe just makes the cut as one of those examples, if only just. 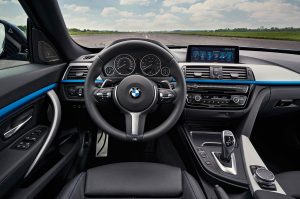 One of the main things I like about the 4-Series is that it makes no attempt at pleasing the crossover-crazed types that dominate today’s market. The focus here is on sharp styling, modest proportions, and sorted driving dynamics. Compared to its coupe and convertible siblings, the 4-Series Gran Coupe makes some concessions to family-friendliness with its four-door layout, but even so, this is still a highly desirable package. The overall shape is sleek and sporty-looking with a fastback roofline that slopes towards a rear end complete with a wide-opening hatch offering loads of cargo space.

The interior isn’t quite as upscale and luxurious as what you would find in the latest Mercedes and Audi products, but it makes up for it with a level of approachability and straightforwardness that those makes can’t touch. The well-designed iDrive infotainment system is complimented by user-friendly buttons and knobs for control come functions such as the sound system and climate control. The driving position feels just right with a beautifully designed steering wheel and comfortable, supportive sport seats that offer an impressive range of adjustment. And unlike a few competing four-door coupe hatchbacks that sacrifice visibility in the name of design (I’m looking at you Kia Stinger), the 4-Series Gran Coupe maintains a pleasant greenhouse with decent sightlines all around.

Under the hood of my 430i test car sits BMW’s ubiquitous 2.0L turbo four pushing out 248 horsepower and 258 lb-ft of torque. The engine’s most satisfying trait is its ability to combine lively performance with remarkable fuel economy. I averaged about 10.0L/100km over a week of fairly spirited driving, which isn’t bad at all for an engine this capable. My only complaint with the 2.0L is that it’s completely lacking in any kind of character and aural pleasure. For that you’ll need to move up to the 440i with its thoroughly enjoyable 320 horsepower 3.0L inline-six. Both engines come paired to a quick-shifting 8-speed automatic transmission along with BMW’s xDrive all-wheel drive system. 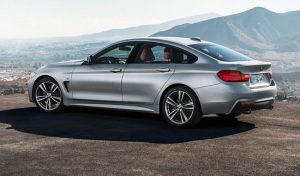 Despite a considerable curb weight, the 430i Gran Coupe moves with a surprising sense of agility and poise. The steering is a bit on the dead-side and the all-season run-flats are short of grip when pushed, but there’s no question that the balance and body control is there. Whether that composure translates into a fun driving experience is another story. Fortunately, Sport or Sport+ modes are available, which do spice things up a notch. The ride quality is acceptable regardless of mode, but I can’t help but wonder whether both cornering performance and ride quality could both be improved with a set of conventional performance tires in place of those rock-hard run-flats.

Pricing for the 430i Gran Coupe starts at $53,250, which is about the same as a 430i Coupe or even a 330i Sedan with the M Sport Package. A few popular option packages can easily push that price tag well over 60 grand, a point at which the 440i starts to become a bit too irresistible. Either way, those looking for a more stylish alternative to the comparably mainstream 3-Series should be quite happy with the 4-Series Gran Coupe.