Although subcompact crossovers are beginning to explode in popularity, Mini has long been riding this trendy segment with its not-so mini Countryman. Even though, at its core, Mini is a brand that has built its reputation on building small, fun to drive hatchbacks, that hasn’t stopped them from building trendy family movers as well.

Power from the hybrid system is more than ample, and the level of grip offered by the all-wheel drive system gives you the confidence to push it just that much harder through the bends. Drive modes include Sport, Mid, and Green, with Sport being the most fun. eDrive and Max eDrive modes are available as well to help maximize the electric range for when it is needed most. As far as crossovers go, this one definitely falls on the more premium side of the spectrum, which isn’t too surprising given the fact that it shares a platform with the BMW X1.

With its greater mass and overall size, the Countryman isn’t as tossable and nimble as, say, a Cooper Hatchback, but then again, it isn’t exactly meant to be. It serves as a compromise for those who want something a bit unique and entertaining to drive, but still need the practicality that comes with four doors and a spacious trunk. In that regard, the Countryman is a success. 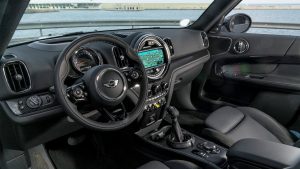 As much as I get the Countryman, there are a few issues that are quite hard to ignore. Being a plug-in hybrid, the Cooper S E is meant to be used as a full-electric vehicle for some distance before diverting to regular hybrid mode when the gas engine kicks in. That distance, unfortunately, is only up to 19 kilometres, which is far less than that of other plug-in hybrids, and hardly useful. Thanks to a small 36L fuel tank, the additional gas range only goes up to 420 kilometres, where average fuel consumption sits around 8.5L/100km in mixed city and highway driving. No better really than a regular gas-only Countryman.

The other issue is price. The Cooper S E All4 starts at $43,490, and, with the many available options, that price can easily exceed 50 grand before fees and taxes. A $7,730 electric car incentive is available here in Ontario to reduce that price significantly. Even so, it’s still around $3,000 more than a comparable Cooper S All4, and I’m not sure that it’s really worth it for only 19 kilometres of electric range. The same money could buy the Countryman’s platform cousin, the BMW X1, which is not only more car, but more badge as well.

If it were me, I’d stick with a base Cooper All4 model for $29,290. To that I’d add the well-priced Essentials Package, which gets you heated seats, a panorama sunroof, and a few other extras for $1,450. The Wired Navigation Package with the larger high-graphic touchscreen display adds $1,200. The beautiful quilted British Oak Chester Leather seating is an attractive, but non-essential, option at $2,250. And $1,400 gets the automatic transmission. The money saved over the hybrid could then be spent on an extended warranty, which I’d consider a must for long-term ownership given Mini’s well-documented reliability issues with organizations such as Consumer Reports and True Delta.

The Cooper S E Countryman All4 certainly has a few trade-offs to contend with, but the decision to go with a Mini is never really based on pure rationality. Mini’s have a way of appealing to that inner nine year old found in us. Few crossovers are able to deliver cool looks and features with a fun to drive character like the Countryman. The fact that it combines those traits with all-weather confidence and family-car practicality is just a bonus. As far as Mini’s goes, the Countryman is the jack-of-all-trades of the lineup, and it’s a pretty satisfying one at that.