2018 Mercedes-AMG E43 - The Mercedes lineup is overflowing with such a wide range of models with confusing names that it’s rather easy to get a little bit overwhelmed. The E-Class, however, is a widely-recognizable name and a long-time runner. It has always occupied a good middle ground in the lineup between the top chauffeur-level S-Class and the smaller entry-level C-Class. As is the case with those models, the variants top out with a pair of AMG models. Those lusting after a thunderous V8 and a wiggly rear-end have the top-dog AMG E63. Below that sits the AMG E43, which apparently is still a proper AMG, only in a more toned-down, affordable package.

Some may question the E43’s legitimacy as an AMG product, especially given the fact that it lacks an eardrum-shattering, hand-built engine that honours the old AMG philosophy of “one man, one engine.” Fortunately, the twin-turbo V6 under the hood is plenty powerful for just about any scenario. With 396 horsepower and 384lb-ft of torque, the E43 can launch itself to 100 kilometres per hour in an authoritative 4.5 seconds. A slick 9-speed automatic delivers quick gear changes both smoothly and seamlessly. There’s even a bit of speaker-enhanced exhaust note to add some sporty character.

To match the strong straight-line performance, AMG tuned the E43’s suspension for better body control and handling through windy roads. It certainly feels composed and planted when hustled, but, for some, the ride might come off as a tad firm. This is still a comfortable cruiser, but those seeking a soft ride with effortless pace would be better served by the E400 with the Luxury Package option and its comfort suspension. Throwing away all sporty pretensions, the package also comes with a traditional badge-less grill with a three-pointed star ornament on the hood. That’s classic Mercedes elegance at its best. 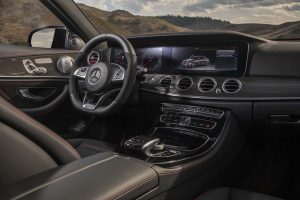 The E43 makes generous use of sound-deadening materials as well as acoustic laminated glass. The result is a near silent cabin at just about any speed. The interior also offers next-level luxury that will leave many competitors in panic. Everything from the buttons to the speaker grills to even the air vents look and feel like decadence. The open-pore wood trim that sweeps around the cabin is accented with soft LED lighting that comes in endless colours. The multi-contour Nappa leather seats feel fantastic and offer many features, including active side bolsters and several soothing massage settings. Short of spending six-figures on something ultra-high-end, I can’t think of another interior that’s quite so opulent.

German luxury cars are famous for their over-the-top technology, and the E43 is no exception. The interior is dominated by a pair of wide-screen displays with sharp graphics and a dizzying assortment of features. None of them, however, are as impressive as the available semi-autonomous systems. Drive Pilot allows the driver to let go of the steering wheel on the highway for up to 60 seconds while maintaining the appropriate speed, staying in the lanes, and even performing a lane change when the turn signal is activated. There’s a definite learning curve to the features and controls, but once that threshold is passed, it’s hard not to be amazed.

With a starting MSRP of $79,900, the AMG E43 is priced to compete with similar performance-oriented luxury sedans which include the Jaguar XF S and BMW M550i. Though both are strong performers, especially the M550i with its twin-turbo V8 engine, but neither one can quite match the richly-appointed cabin nor polish of the Mercedes. An E63 is more of a thrill, and an E400 would make a better laid-back cruiser, but for balancing sportiness with comfort, few others can beat the well-roundedness of this package.