In these booming crossover times we live in, it’s hard to imagine a time way back when rugged little boxes on wheels were more niche than mainstream. The Kia Sportage, however, can trace its roots back to just such a time. Back when the Toyota RAV4 and Honda CR-V were just fresh faces and the Ford Escape and Nissan Rogue were non-existent, the Sportage had already made its mark on the world.  Despite a history stretching back farther than most, however, the Sportage is stilling working on establishing itself in the compact crossover segment. So what does the latest model have to offer?

The exterior design is arguably one of the Sportage’s stronger selling points. Though some angles are a tad polarizing, the overall look is far sleeker than many of its competitors, some of which couldn’t be bothered with any attempt at styling. The interior too is well-designed with logically arranged controls and a user-friendly infotainment system. Kia’s touchscreen interface is one of the best in the business. The front and rear seats are pretty spacious, but the cargo area does seem a bit smaller than the norm. It also lacks handy release handles to collapse the back seats found on some competitors. 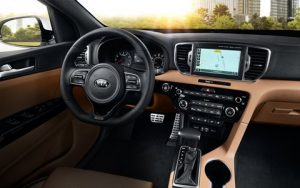 Most models come equipped with a 2.4L 4-cylinder engine producing 181 horsepower and 175 lb-ft of torque, which is about on par with most rivals. The top trim SX Turbo tested here, however, uses a more potent 237 horsepower 2.0L turbocharged engine. Both engines come matched to a smooth-shifting 6-speed automatic transmission. Performance from the turbo unit is quite strong; however, you do pay the price at the pump. I averaged 12.5L/100km over mixed city and highway driving. The 2.4 isn’t rated a whole lot better, so downsizing in this case doesn’t exactly equate to fuel savings. If fuel efficiency is what you’re after, get the Niro.

Despite the underwhelming fuel economy, the Sportage is quite a pleasant drive. It isn’t as sporty and well-balanced as the class-leader Mazda CX-5, but body motions are still well controlled with little sacrifice to ride quality. The suspension-tuning is on the firm side, but it’s far from uncomfortable. Road noise is also relatively hushed at most speeds. 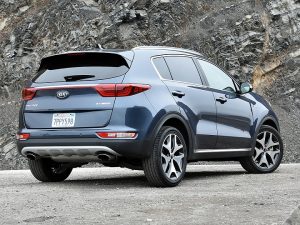 Pricing starts $25,095 for an LX model equipped with front-wheel drive or $27,295 with all-wheel drive. The next up EX adds leather seats with 10-way power driver’s seat, smart key push-button start, a heated steering wheel, 7-inch infotainment system, and standard all-wheel drive all for $30,595. The EX Premium adds a panoramic sunroof, power liftgate, rear parking sensors, bind-spot monitoring, and automatic emergency braking for $33,995. Moving up to the EX Tech or SX Turbo adds additional features plus the turbocharged engine on the top model, however, they don’t appear to be worth the price premium which goes as high as $39,595. It’s worth noting though that Kia is often good for sales incentives, which should sweeten these prices further.

The Kia Sportage is a crossover that’s pretty difficult to fault. Its combination of strong design and high value, particularly on the middle EX and EX Premium level trims, is hard to ignore. Its track-record for reliability is solid. And, like all Kia models, an industry-leading 5 year/100,000km comprehensive warranty comes standard. The compact crossover segment is a crowded one, but the Sportage stands out enough to make it worth a closer look.