Although Kia has made tremendous progress over the last several years, the up-and-comer brand still has a bit of a difficult time standing out in a crowd dominated by the Hondas and Toyotas of the world. Anyone shopping for a solid compact car has likely considered a Civic or Corolla, but a Kia Forte was probably either forgotten or not even considered. In order to stand out, you need to offer unique, interesting, maybe even a little weird models that don’t have any obvious rivals. The Kia Soul is a great example of that.

This practical box-on-wheels has proven to be something of a hit for the Korean brand, and it’s not exactly hard to see why. In a world dominated by dreary transportation appliances that simply blend into anonymity, the Soul makes an active effort to be a standout. Its charming, boxy looks give it personality, which is more than can be said of most hatchbacks and crossovers. It even comes in a few cool colours, including Wild Orange, Caribbean Blue, and Caffeine Brown.

Those boxy dimensions also help give it plenty of interior space. The cabin has an airy feel with enough room for four adults to sit comfortably. The cargo area is plenty spacious as well. The controls on the instrument panel are about as straightforward as they come, and Kia’s touchscreen has one of the better interfaces on the market. In typical Kia fashion, equipment levels on most trims are quite lengthy. My Technology Package equipped test car came with leather seats heated both front and rear, heated steering wheel, panoramic sunroof, 8 inch multimedia system with Android Auto and Apple CarPlay, and a Harmon Kardon sound system with coloured mood lighting around the speaker grills. 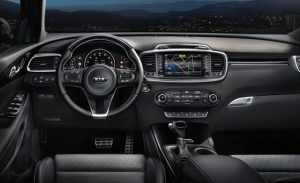 The Soul offers a number of different drivetrain options depending on the trim level. My SX Turbo model came equipped with a 1.6L turbocharged engine producing 201 horsepower. That’s a good deal more than the 130 horsepower you get from the 1.6L engine in the base LX model, and it certainly feels quick enough. Turbo models also get a fancy 7-speed dual-clutch transmission, which helps make them slightly more fuel efficient than the less powerful non-turbo models.  I averaged about 10.0L/100km in mostly city driving, which isn’t bad considering the performance.

Pricing starts at $19,995 for the LX model and stretches as high as $29,995 for a full-equipped SX Turbo Tech. As nice as it is to have the additional performance of the Turbo model, I’m not sure whether it’s worth the price premium. For maximum value, I’d probably stick with the EX model, which, for only $1,600 more than the base LX, adds a heated steering wheel and heated front seats, a backup camera, pretty-looking 17 inch alloy wheels, and a more power 2.0L engine with 161 horsepower. It may not be as powerful as the Turbo, but the simplicity of the EX model’s naturally-aspirated engine and conventional 6-speed automatic transmission should serve better from a long-term reliability standpoint.

Overall, the Kia Soul has a lot going for it. It’s well designed and packed with useful features. It’s just as practical as many larger, pricier crossovers on the market. It even comes with a great 5 year or 100,000km comprehensive warranty. It’s no hot hatch in terms of performance, even in Turbo form, but its charming looks and thoughtful details help make it fun and interesting. Anyone looking for a reasonably-priced, practical hatchback that’s different from the same old boring options should definitely check this one out.