It’s no small stretch to say that the Jeep Wrangler is one of the most recognizable vehicles in the world. With its unmistakable looks, flip-down windshield, removable doors, and foldable soft top, the Wrangler is in a class of one. It’s also an industry benchmark for off-road capability with a talent for scaling treacherous terrain that baffles lesser 4x4s. Much to the relief of Wrangler fans, none of that has changed for the model’s 2018 redesign. The changes that have taken place, however, have resulted in the most capable, livable, practical, efficient, and technologically advanced Wrangler yet.

Indeed, the most remarkable achievement with the latest Wrangler, now known as the “JL,” is how it has been improved in so many significant ways without compromising its talents or diluting its soul. The exterior, for example, though seemingly unchanged from its JK predecessor, has been stretched for increased interior room and reskinned in lightweight aluminum for improved efficiency. The doors and windshield are now easier to remove and the zipper-free soft top requires less effort to fold. Removing the heavy Freedom hardtop remains a two to three person affair, but at least every bolt has its own neat little place under the cargo area carpet to keep them safe. Where life could be made easier, it was.

Even more dramatic are the interior improvements, particularly on the higher end Rubicon Limited model tested here. The attractively designed centre stack includes Jeep’s Uconnect infotainment system which is one of the slickest in the industry in terms of ease of use and responsiveness. The rest of the controls are well-arranged and have an appropriately rugged, robust look and feel to them. Accommodations for both front and rear seat passengers are almost family car-like with plenty of space and places to connect devices. The options list includes features such as a backup camera with proximity sensors, blind spot monitoring, and even a heated steering wheel. 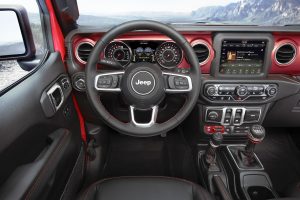 The newfound comfort extends to the on-road driving experience helping to make the JL the most livable Wrangler to date. A softly-sprung, live-axle suspension means that there’s still plenty of wallowing and body roll. And the driving experience as a whole is still rather loud, crude, and truck-like. Accept the Wrangler for what it is, however, and it becomes a far more pleasing on-road companion. A tilt and telescoping steering wheel means that an ideal driving position is easy to find. Outward visibility is now acceptable thanks to large glass and a rear window that’s not totally obstructed by the tailgate-mounted spare tire. The wind and tire noise, though significant, are now muted enough to allow occupants to carry a conversation at highway speed.

Don’t think for a moment, however, that the Wrangler has gone all soft and crossover-like. This is still the king of off-roaders, and no model better illustrates that than the top-dog Rubicon. All Wrangler models have improved off-road capability when compared to their predecessors, but the Rubicon takes things from capable to downright insane. Along with improved ground clearance, approach, departure, and break-over angles for tackling slopes, the Rubicon gets beefier locking front and rear axles, 4:1 transfer case, electronic sway-bar disconnect for better wheel articulation, and meaty 33-inch all-terrain tires that just refuse to let mother nature stand in their way.

The standard drivetrain remains a naturally-aspirated 3.6L V6 coupled to a 6-speed manual gearbox with a new shifter design for improved feel. My tester came equipped with the optional ZF 8-speed automatic, and it’s the transmission I would spec. Gear changes are smooth and well-timed to maximize acceleration or fuel economy depending on the scenario. With the help of a reduced curb weight, a front-axle disconnect, and an engine start/stop system, the Wrangler does see some improvement in fuel economy. I averaged 15.0L/100km around the city, and around 9.5L/100km was doable on the highway. A 2.0L turbo mild-hybrid 4-cylinder and a diesel engine will join the mix offering more choice in drivetrains. 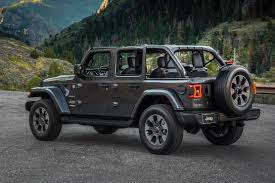 Unfortunately, with big improvement comes big price increases. The two-door Sport model starts at $33,945 complete with steel wheels, wind-up windows, and no air conditioning. The 4-door Unlimited model starts at $42,245 in Sport S trim or $46,245 in the more popular Sahara trim. The Rubicon can be had in either 2-door or Unlimited versions which go for $46,345 and $49,245 respectively. My tester, optioned to the hills with the 8-speed automatic, Freedom hardtop, LED lighting, 8.4 inch Uconnect infotainment, Alpine sound system and other goodies, came to just over 60 grand. We’re talking Range Rover Evoque money here.

As expensive as it is, it is hard to determine the value factor here because the Wrangler basically exists in a class all on its own. At the end of the day, no other vehicle offers the freedom of being to lose the roof, doors, and windshield and drive off to pretty much anywhere you please. No other vehicle comes close to matching the Wrangler’s magic formula, which helps explain its showroom appeal and sky-high resale values. In spite of its many incremental improvements, the Wrangler very much remains what it always has been, and fans wouldn’t have it any other way.

By Shari Prymak If your mind is set on having an adventurous, go-anywhere 4×4, chances are the Jeep Wrangler has made your short list. As purpose built as it is, the Wrangler’s versatility goes beyond […]