Toyota essentially invented the North American CUV market in 1998 with the Lexus RX300, and they’ve been one of the biggest players in this market since then. Toyota’s Highlander serves as their three-row CUV in one of the hottest segments around. Updated for 2017, the changes come together to add a lot of polish to what is an otherwise competent CUV. We were sent a 2017 Toyota Highlander XLE V6 AWD painted in a shade of Celestial Silver Metallic.

It’s not always easy to make a utilitarian three-row crossover look good, or unique for that matter, but the Highlander features a handsome shape that doesn’t make it look quite as top-heavy as something like a Nissan Pathfinder looks. The 2017 model year update gets a number of updates, both inside and out, as well as under the hood. At first glance, the front grille the big giveaway, with a new upper and lower design that somewhat mimics the current design language employed by Lexus (read: big gaping grille). It’s not quite as aggressive or as polarizing, but it is sure to grab your attention. The Highlander gets new taillights, and the handy flip-up glass hatch makes a return. 19-inch wheels (on all but the base LE, which gets 18-inch wheels) with wide 245-section rubber live at all four corners.

The headlights are also updated, and now incorporate a LED daytime-running light strip along the bottom edge. Unfortunately, the headlights are still of the halogen projector variety. Even on the range-topping Highlander Hybrid Limited, halogen headlights are your only choice, and there’s no option to upgrade to LED low-beams, or even HID low-beams. While the halogen headlights do the job admirably, it’s discouraging to see cars like the Toyota Corolla get full LED headlights across the board, while the Highlander (a vehicle that costs three times as much, depending on the trim level) is left behind. This is one of the few flaws of the pre-refresh Highlander, and it carries over for 2017.

Inside, the Highlander is mostly unchanged, and that’s not totally a bad thing. It remains superbly functional, with the headline interior feature being the storage shelf that runs across the majority of the front dashboard. The eight-inch touchscreen is also unchanged, which also means that today’s connectivity options (namely Android Auto and Apple CarPlay) remain absent. Toyota has gone on record to publicly shy away from this sort of integration, partly because of their own efforts which they feel provide more value. In other words, they feel keeping Apple and Google out of their dashboards will pay off, even in the face of growing demand across the industry. Satellite navigation is standard on XLE, as is Toyota’s nifty Driver EasySpeak system. It’s a simple system that uses a microphone to amplify the driver’s voice for third-row passengers, who may be just a little too far away to hear.

Heated leather seats will hold up to seven in this configuration, as the $1,595 SE Package trades away that eight seat capacity for two captain’s chairs in the second row. Where the Highlander shows its age is how tight it is, relative to some of the newer, and larger competition that it faces. The first and second row are spacious enough, but it’s the third row and cargo area that is noticeably tighter. A person of average stature will fit in the third row, but their knees will probably be high up in the air, thanks to the low seat bottom. To quantify the reduced space between the Highlander and Honda Pilot: the Highlander can hold 1198L with the third row folded down, versus the Pilot’s 1583L. With the third row up, the Highlander can hold 391L, and the Pilot can do 524L. Size is not on the Highlander’s side, and it is one thing that can really only be resolved with a complete redesign. 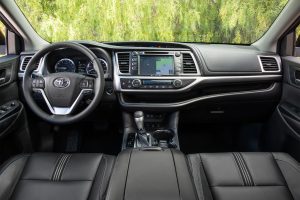 One of the big pushes lately in the mainstream automotive industry is the inclusion of active safety systems. Forward collision warning and lane departure warning really do work and give just about everybody on the road that extra helping hand, reducing injuries and lowering repair costs, if not mitigating them entirely. The Highlander gets Toyota’s new “Safety Sense P” system as standard equipment, as does many other models in the family. The “P” stands for Pedestrian Detection, in which the Highlander will fully stop itself if it thinks a collision with another vehicle or pedestrian is imminent. The last perk that TSS-P gives you is dynamic adaptive radar cruise control. Formerly a feature reserved for the most elite of luxury cars, it is now technology that is accessible to a much wider population. Credit goes to Honda for being one of the first to put all these active electronic driver assists together into an easy-to-understand package, called HondaSensing.

The Toyota Highlander has always been a strong contender thanks to its powertrain. All models sold in Canada come equipped with a standard 3.5L gasoline V6, updated for the 2017 model year. Thanks to the addition of Toyota’s D4S direct and indirect gasoline injection system, as well as the new ability to run on a simulated high-efficiency Atkinson cycle, power goes from about 270hp, to 295hp at 6600RPM. Torque output is also increased to 263lb-ft at 4700RPM. This additional power is routed through a new eight-speed automatic transmission (sourced from Aisin), which allows for better straight-line acceleration, and improved highway efficiency. All-wheel drive is also standard on all but the base LE. What’s interesting: the AWD Highlander will still allow you to manually lock the electronic centre coupling, sending an equal amount of power to the front and rear axle. This is handy for low-speed situations where you may need maximum traction to get moving.

The more efficient combustion is also paired up with a new idle start-stop system further improves numbers when you’re stuck in urban stop-and-go traffic. Toyota rates the updated Highlander at 12.0L/100km in the city, 8.9L/100km on the highway, and 10.6L/100km in a combined cycle. After about 600km of mixed winter driving, I ended up at an indicated real-world average of 11.6L/100km, which is about 10% better than the results obtained with the previous-generation Highlander with its port-injected 3.5L V6 and six-speed automatic transmission. The fuel tank will hold 72.5L of regular 87-grade fuel.

Three-row crossover pricing has never really settled down, with manufacturers constantly jockeying around and trying to one-up one another as every year goes by. Honda’s latest strategy with the Pilot has been to increase the amount of standard equipment, even in the base LX model. It features AWD as standard equipment, which is fairly rare even in Canada. Combined with HondaSensing that is now also standard equipment, the Pilot starts at a hefty $40,090. On the other end of the scale, the Kia Sorento starts at a low base price of just $27,695, but you only get two rows of seating, and the base engine only offers 185hp. Mazda’s CX-9 slots in somewhere in the middle, but adding AWD immediately sees the price jump to just over $40,000 as well.

The base Toyota Highlander LE V6 with front-wheel drive starts at $35,500. Adding AWD bumps the price to $37,995. Jumping up to the XLE V6 AWD sees the price climb to $43,995. For that, you get a larger 8-inch infotainment interface with satellite navigation, 3-zone climate control (the rear occupants get their own zone), and leather seating surfaces. This particular tester also came equipped with the $1,595 SE Package, which swaps in some black 19-inch aluminum wheels, a blacked out grille and roof rails, and the all-important second-row captain’s chairs. This brings the subtotal to $45,590 plus taxes and additional dealer fees. The fully-loaded Highlander Limited V6 AWD stickers at $49,995, and then you get to the two hybrid options available to Highlander shoppers. The Hybrid XLE starts at $49,985, and the Hybrid Limited is the flagship, at $55,990.

Toyota’s trump card is the availability of Hybrid propulsion. Adding electrification to the gasoline V6 not only adds horsepower, but significantly improves fuel efficiency for those who can best take advantage of it. Overall, the Highlander is not the most dynamic (see the Mazda CX-9 or Kia Sorento), nor is it the biggest (see the upcoming Volkswagen Atlas). The Highlander, like many Toyota products, enjoys playing in the middle of the field, with conservative design inside and out, as well as that rock-solid reputation for quality and reliability that Toyota owners have come to love. Its faults are minor, and are really only faults because of what everybody else is doing: HID or LED headlights is a minor nitpick, but because everybody else does one better, halogen headlights stand out on a feature sheet. Its stiffest competition is the Honda Pilot, which delivers on that all-around goodness, but offers more third-row and cargo space for those who need it.

The 2017 updates to the Highlander are more than just skin deep – the powertrain upgrades alone do a good job keeping it fresh and relevant in this hyper-competitive market. It isn’t quite enough to get pre-refresh Highlander owners out of their own cars and into the new one, nor is it quite progressive enough to appeal to drivers interested in being on the cutting edge of technology, but it’s definitely worth a look at on your long shopping list of three-row family crossovers. When it comes to the family vehicle of today, simply being the known-good entity that can be trusted, will be what sells the Toyota Highlander.