2017 Hyundai Ioniq - The Hyundai Ioniq may be a modern electrified vehicle, but one of the most important things to know about it is that it’s very good at being just a car. Unlike, say, the Toyota Prius, which flaunts its hybrid status with its unique, over-the-top styling, the Ioniq is content with blending into the herd and not shouting about its electrified underpinnings. This is a regular everyday hatchback that just so happens to be powered by electrons.

The sense of normalcy extends to the interior, where, instead of fancy giant tablet-like screens and touch-sensitive controls, you’ll find simple to use buttons and knobs and an intuitive touchscreen. Tesla fans probably won’t be impressed, but for those making the leap from a conventional gas-powered vehicle with traditional controls, the transition to the Ioniq will be an effortless one. There’s also a reasonable amount of space for four to sit comfortably, or five in a pinch, as well as a spacious cargo area behind the foldable seatbacks. There’s also a storage space between the front seats that can accommodate a small handbag, which is a nice touch.

One of the things that makes the Ioniq somewhat unique is the fact that it comes in three different forms. Depending on your budget and/or preference, you can get an Ioniq as a regular hybrid, a plug-in hybrid, or a fully electric vehicle. Most rivals only offer one or two of those at most. I tested the full EV version, which passes on the 1.6L gasoline engine and 7-speed dual-clutch transmission used in the other two models, and instead relies solely on an electric motor and battery pack. 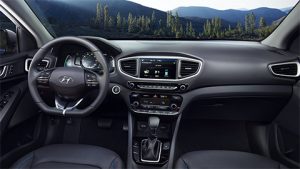 Like most other electric vehicles, the Ioniq is a remarkably refined car. The drivetrain is silent and buttery smooth at just about any speed, with just enough power for navigating city streets and merging onto highway onramps. I also dig the paddle shifters behind the steering wheel which control the level of regenerative braking used for charging the battery. Level 1 is perfect for highway drives where coasting is more desirable, whereas Level 3 works well for congested city commutes where it makes sense to use the one-pedal driving technique to help charge the car.

The biggest issue with the Ioniq EV is the total driving range, which maxes out at only 200 kilometres. That’s significantly less than what you get from the Chevrolet Bolt or Tesla Model 3, which can go up to 350-400 kilometres. Yes, with a starting MSRP of $35,649 before government incentives, the Ioniq is a lot cheaper than those two, but it’s no cheaper than a Nissan Leaf, which has a greater range of up to around 250 kilometres, as well as the benefit of two generations of refinement and a proven track record. The provincial incentive in Ontario is $14,000, which brings the price down into the low 20s.

Given the range limitations of the EV model, the Plug-in Hybrid, or even regular Hybrid models might make more sense to more people. The Hybrid has a starting MSRP of $24,299 and maxes out at $31,749 with every option. The Toyota Prius, by comparison, ranges from $27,190 to $30,425. The Prius also has a well-established reputation with proven low running costs, top-notch reliability, and excellent resale value. What the Ioniq has going for it is the available Plug-in Hybrid model, which has around 40 kilometres of electric range before running on gas, and, here in Ontario, undercuts the price of the Hybrid model thanks to the provincial incentives. That makes it a strong option against both hybrid and conventional hatchback alternatives.

The Ioniq isn’t meant to break new ground on the electrified vehicle front, but it is a well thought out hatchback that does normal tasks very well. Its conventional styling and easy-to-use controls should suit the tastes of those who can’t be bothered with gimmicks and just want a proper car that’s affordable and efficient. A class-leading warranty doesn’t hurt either. The Ioniq is proof that the transition to electrified vehicles doesn’t have to be dramatic and scary. It can be more of what we’re used to, only with fewer visits to the gas station.