2017 Buick Encore - Buick has worked hard to shake the “old man car” image for which they were known. There are few strategies that work better for this than embracing the latest consumer trends, such as the craze for small crossovers. The Encore was something of a pioneer in that it was one of the first premium subcompact-sized crossovers to hit the market. It seems that the move has paid off. To even GM’s surprise, the Encore is now Buick’s best-selling model.

After spending some time with one, it’s not hard to understand its popularity. In many respects, the Encore looks and feels a step above its mainstream rivals. The exterior design, though stubby-looking, is rather sophisticated and attractive. It’s on the inside though where the Encore impresses most. The materials feel mostly premium-grade and the controls for the centre stack and touchscreen are all intuitive and well laid out. The overall spaciousness is quite impressive given the tiny, city-friendly dimensions. Two adults can sit comfortably in the back seat, the trunk is a useful size, and the seats can be folded flat to maximize space.

On the move, it quickly becomes clear that the Encore has been tuned for comfort over cornering performance. The ride is smooth and composed even over broken asphalt. There’s also very little wind or road noise thanks to the extensive use of sound-deadening materials and some clever noise-canceling technology. With its short wheelbase and relatively quick steering, the Encore feels quite nimble and maneuverable, especially in tight city scenarios. 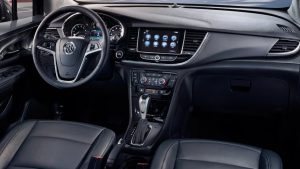 Where it comes up a bit short is under the hood. The standard engine is a 1.4L turbocharged 4-cylinder that produces 138 horsepower and 148lb-ft of torque. It gets the job done, but nothing more. For an additional $1,050, you can get a different 1.4L turbocharged engine that uses direct injection and an engine stop/start system. Don’t bother with it. The added technology and complexity offer little to no gain in performance and fuel economy. I averaged 10L/100km in mixed city highway driving, which seems somewhat high for a small displacement engine in an equally small vehicle.

In terms of pricing, the Encore sits between mainstream rivals such as the Honda HR-V and Mazda CX-3, and full-on luxury makes such as the Infiniti QX30 and Mercedes GLA. Prices start at $23,195 for a base front-wheel drive model. All-wheel drive is available as well. My pick would be the higher up Essence trim in front-wheel drive, which comes with heated leather seats, heated steering wheel, climate control, blind-spot monitoring with rear cross traffic alert, and LED headlamps for $30,995. Optional extras such as a sunroof and active safety systems are tempting, but boost the price within reach of a few luxury rivals.

Overall, the Encore is quite an appealing little package. It’s the perfect fit for anyone looking for a small, city-friendly crossover with an upscale vibe and a high level of comfort. In many ways, it impresses enough to question the decision to go with a pricier offering with a luxury badge. The subcompact crossover segment is a crowded one, but the premium qualities of this little high-achiever help it stand out from the herd.